Wasn't sure what heading this should go under but it certainly is astro-related so I'll post it here.

At just after 5:30am on 10-16-21, NASA sent a probe named Lucy into space from Cape Canaveral, eventually headed toward some asteroids. Ever since I was a kid in the early 60 following the space race, I dreamed of seeing a launch live. While staying in Florida at the space coast for the month of October, I finally got my chance, a good 60+ years later.

Here are my two shots. My first attempt to capture a rocket launch. They were taken with my a6000 with a Meike 12mm manual lens @f.5.6, iso 100. First exposure of about one second was manually triggered with my intervalometer, to capture the start of the launch. Then again, using a intervalometer, the second exposure ran about 3 minutes 44 seconds. I had the intervalometer set for five minutes but canceled the exposure early for fear the rocket was leaving the field of view. In the second image I did a slight straightening of the horizon and a very slight crop. First shot is, as-taken.

I wasn't sure exactly sure where the launch tower was, so I had the camera pre-aimed in the general direction. I had it tilted high enough to keep the horizon in the frame, yet keep people in the foreground out of the frame. When the glow of the rocket appeared, I was able to swivel the camera/ball head to the right spot. I knew there's a second or two after the rocket motors were fired, that the launch vehicle is held in place while the engine spool up. This gave me time to recent the camera. I should have placed the initial launch spot more to the left of the frame to be able to capture the entire arc. Fortunately, the rocket motor cut off shortly after I ended my exposure so I didn't miss much. I was quite surprised at the orange/yellow color of the exhaust plume. In post, I used levels and gamma in Affinity Photo to dial back the sky glare and to try to match as closely as possible how it looked visually. Of course visually, the rocket was a rising dot, not a line.

The bright lights in the foreground is the Port of Canaveral. I had intended to set-up farther west away from the lights, but couldn't find the spot I'd pre scouted the day before. Everything looked so different in the dark. My biggest fear, besides screwing up the shot, was the bright lights of the port blowing out the view. Instead, they provide great contrast to the color of the rocket. I haven't looked to see why, but in spite of having long exposure noise reduction turned off, the camera took a 3 minute, 44 second dark frame after the exposure. It's interesting to note, the beginning of the launch was silent due to me being set-up over 10 miles away. It wasn't until the rocket reached the clouds that the boom and roar reached me. It was a great experience. I felt emotionally the event was much like photographing and experiencing a total solar eclipse. The mix of excitement, apprehension and feeling of panic about getting the shot, is prime for causing mistakes. Remembering this from the 2017 Solar eclipse, I repeatedly checked, double checked, and triple checked my equipment and settings. I kept telling myself to keep it simple, stay calm, and go through the process as planned. It worked. My only mistake was not setting the camera for RAW+jpg. I only got jpg. Still, it turned out better than I had expected. Note: the Big Dipper is standing on its handle to the right of the arc, one handle star hidden by the clouds. Polaris is to the left of the arc. The two stars just to the left of the lower part of the arc make up the end of the Little Dipper Bowl. Also note how the Big dipper stars are trailed, but Polaris is not because it lies a very short distance form the North Celestial Pole and didn't move much in <4 minutes. The band of clouds was a surprise because they were invisible in the dark sky, until the rocket fired off. They REALLY add to the shot. What a great surprise! 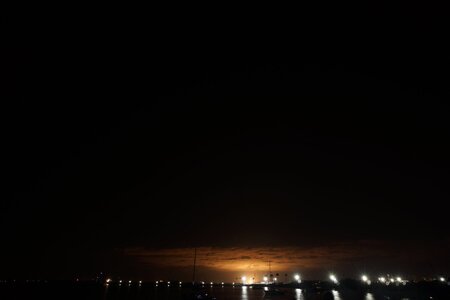 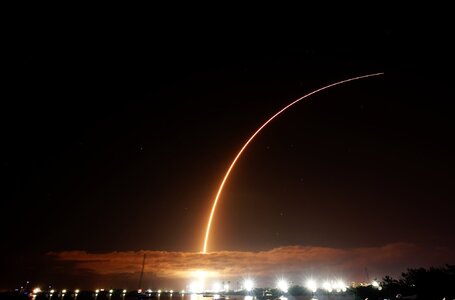 I saw the Apollo-Soyuz launch from the Cape in the 70's but that was daytime, I would love to see a night launch. I am looking forward to seeing the images returned by Lucy in a few years.

That last shot is one you should be so proud of as I love it.
A

While I did do some research on how best to capture launches, I consider luck had a lot to do with it. I trusted the suggestions of others regarding camera settings, and having experience imaging under tight time limits helped me stay cool(er) setting up, and during the event. Luck brought me two things that I originally didn't want. The clouds, and the port lights. Prior to the launch, as I set-up I was unhappy with both. I wasn't at the spot I had scouted out earlier, and I was worried about the bank of clouds expanding. I even started off with my camera pointing too far to the left. The suddenly glowing clouds alerted me that I needed to re-point the camera and I had no idea how much of the arc I'd catch. I just guessed, and trusted the wide angle lens would catch it. In the end, the negatives turned out to really add drama to the photo. It turned out I was in the wrong place at the right time.

In the end, I couldn't be happier with the results. Having been a kid during the Moon race in the 1960s, it was always a dream of mine to witness a launch live. Being able to finally experience one, AND capture a great photo of it is hard to beat.
Reactions: Aussie
You must log in or register to reply here.