You are using an out of date browser. It may not display this or other websites correctly.
You should upgrade or use an alternative browser.
Welcome to the New Sony Alpha Shooters Community
Our community was only launched in August 2020 but is already thriving thanks to many amazing and helpful members. We'd love to welcome you on board too!
Join Now
R

I wanted to share my on-the-go solution and hear from yours too.

Procrastinating the purchase of those expensive 180GB (R:800/W:700) CF-A cards, and since I have not yet once fully saturated my A1 buffer (shooting 10-20fps uncompressed RAW, sometimes in APS-C mode to get 900mm max reach without using TCs), I am sticking for now with the use of 128GB (R:300/W:299) UHS-II SD cards. Once/if a card gets full (or whenever I get a break from shooting and it already contains some valuable images) I use an R:300 SD-UHS-II Sandisk card reader to make a first copy (SOC JPEGs and RAWs) to my iPad-pro (USB-C port - USB-3.2 speeds), then use the iPad to do an initial culling round (of the SOC JPEGs because iPad-pro cannot yet display/render the A1 RAWs) and/or show the fresh images to someone asap (without having to peek at the on-camera diopter adjusted viewfinder), but because iPad's internal SSD storage will fill up quite quickly as well I then proceed to off-load the images (only the RAWs) to a 2TB SSD (Sabrent XTRM-Q) external ThunderBolt-3/USB-Gen2 (40Gbps/10Gbps) drive.
Once I arrive home the Sabrent connects either to my WFH windows-10 PC (with a 40Gbps Thunderbolt-3 USB-C port, but a normal USB-C Gen2 10Gbps port would also work with this versatile external driver, only slower) for another backup, and then to the studio MacMini (wich has 4x 40Gbps Thunderbolt-3 USB-C ports) for direct (without making a copy to the Mac's internal SSD) final RAW culling and editing.
Final JPEG exports (3240px short edge 98% quality) are also done to the external Sabrent SSD drive (with stays attached to the MacMini until I go out the door for another shoot) and then I might create an album on the iPadPro (always using the 2TB SSD Sabrent drive) with those edited/exported JPEGs, finally replacing the original SOC JPEGs that I kept on the iPad until the RAW culling+edit+export workflow was complete.
That serves as a JPEG backup and also as a show-in-person album.
Most RAWs are deleted after I export the edits, I only keep the portfolio grade RAWs (100 out of 50.000+ in last 4 years) as it would cost me 5TB of storage to keep 50.000 x 100MB A1 uncompressed 50mpx RAWs in the next 3 years.
Even the 4* rated RAWs I only keep for about 1y-2y max, and delete them (after a final re-edit and export at full res) if no prints where ordered for them. 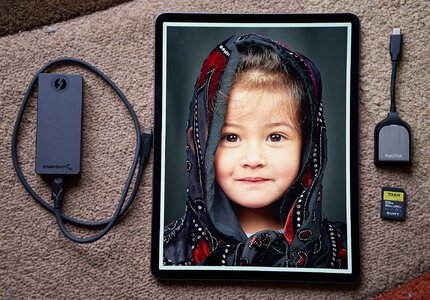 ¡Sounds intersting! I've never been one to delete RAWs, even considering I shoot stills and videos - storage isn't that expensive nowadays (until Google forces me out of my G Suite unlimited storage, that is) - but it does seem reasonable to get rid of at least the unusable stuff, instead of just hoarding bytes.

My workflow is usually in constant evolution... mostly because different customers have different needs, but these days I've been working steadily at my country's National Forestry Service for a few months, and been having fun designing the most optimal workflow possible. Since I'm out in the mountains a lot, having an iPad copy from cards to drives would be ideal, although I do think iPad's prices are a little steep. I'm also working on a way to upload some edits on the go, which so far has happened on my mobile phone.

At home, I turned an old Celeron Dell laptop into an Ubuntu Server running Docker and a few services, including Nextcloud, Plex, and currently looking for a good Media Managing platform that could auto tag the way Google Photos does. It's reverse proxied & running a script that updates DNS records for a private domain, so I can access it from the field.

Being the crackpot I am, right now I'm looking at building a Raspberry Pi device that automatically copies from card to internal (but easily removable) 2.5" drives (like a DIY Gnarbox). However, the whole quick edit & upload part would be harder to cover here; although there are image editing solutions, it'd defeat the purpose of it being just a simple, autonomous device with a couple buttons and a two-line LCD display, if not a couple LED lights instead, just showing the process status.

So, we're back again at an iPad, which could probably do the whole copying/backing up, plus editing and uploading at once... it's just, once again, they're so freakishly expensive! Maybe an Android tablet? Samsung makes some pretty cool ones, but they're not much cheaper than iPads.

As you may have already figured, prices are a big barrier for my workflows... my country's income/expenses ratio is huge, especially after COVID struck, with living costs similar to what I spent while living in California, but incomes being about a third. If it wasn't an issue, I'd replace my i7 laptop with a full blown desktop monster + iPad/Galaxy Tab/Surface, and my home office server, with a proper NAS + SBC cluster, for both storage and computing.

Another option I've been thinking of lately is dismantling my laptop and placing it piece by piece into a Pelican-type case, along a large powerbank to juice up both the laptop and other devices (with it's own powercord as well, it's be a portable charging station), along with a slot to place Resolve's speed editor and slots for 2.5" drives. That'd be good for traveling, but definitely not really useful while hiking uphill for hours at a time.
Reactions: Reciprocum
You must log in or register to reply here.

Direct copy from a7r IV to an external drive?