Worth attempting Astrophotography with what I have?

Would the 3.5-5.6 16-50mm work? Am I just wasting my time because I don't have a 1.8 or 2.4 lens? I'd hate to leave my visit with extended family to hang out 2 hours away waiting for darkness without the chance of success. What do you experienced Astro shooters think?
Reactions: J.Duffy

I'm no experienced astro-photographer, but I can share a sample of a picture taken with a kit lens during the comet appearance last year and a few thoughts. 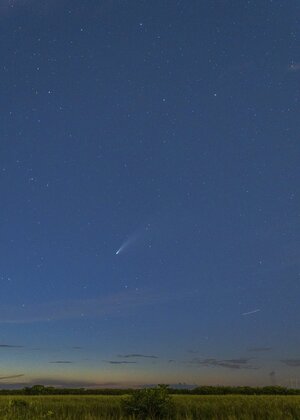 This was far from "dark sky" territory, so you can see the light pollution (and an airplane) in the lower part of the image. 15 seconds at an f-stop of 4.5 and ISO 2000. So not a great pic, but not terrible. Things I would have done differently now that I've tried it:

Reactions: Jeff A, Janice and J.Duffy

FowlersFreeTime said:
I'm no experienced astro-photographer, but I can share a sample of a picture taken with a kit lens during the comet appearance last year and a few thoughts.
View attachment 8282
This was far from "dark sky" territory, so you can see the light pollution (and an airplane) in the lower part of the image. 15 seconds at an f-stop of 4.5 and ISO 2000. So not a great pic, but not terrible. Things I would have done differently now that I've tried it:

This gives me hope that maybe I might be able to capture something.
Reactions: FowlersFreeTime
A

A quick answer is, yes, yes and no. How's that for helpful? The yes part is you can do astrophotography in many places including some darker areas of a town. The no part is even if Sedona is a certified "Dark Sky City, this only means it follows certain lighting rules which require the use of full cut off light fixtures and lumen levels that are "only" as bright as needed for a task. While this in theory reduces a city's light pollution level, it's still a city with zillions of lights. These guidelines are meant to reduce the amount of light the city projects up into the sky, it doesn't really make the city much darker from within. At best, there may some areas in town with fewer lights glaring into your camera. You'll may still need to drive out of the city limits to get darker skies. How far and where is difficult to predict, sometimes a few miles is all you need - if - you are shooting an area of the sky in the opposite direction of the city.

The second yes, is yes, you can shoot the stars with your existing equipment. Your biggest challenge will be focus. Getting pinpoint stars takes perfect focus and this can take some practice. Second, the longer the lens, the shorter the exposure needs to be to prevent stars from elongating due to the Earth's rotation. There's online calculators where you plug in your lens focal length and it will give your your maximum allowable exposure settings. Try to balance ISO speed with noise.

My advice is, go ahead and try. That's how you learn and it certainly won't be a waste of your time. Adjust your expectations to your conditions and your equipment. Work with what you've got. The brighter the sky, the fewer stars you'll register without the sky looking washed out. Your family may even know of a park or other darker nearby area you can go. You might even be able to get some shots from their backyard depending on the surrounding lighting and where they live. Chris' photo is a great example of of an image taken in less than completely dark skies. Lots of stars are visible. I've attached a photo taken in deep twilight which will simulate a light polluted sky. As you can see, having some trees or even a few clouds in the image can add interest to a less than perfect star shot.

Speaking of adding interest . . . I suggest you try taking some images that include some of the great rock cliffs and formations in the Sedona area in the frame. Even faint light from the city can illuminate the rocks making for some neat images with rocks and stars in the same frame. I've also attached a long exposure photo of rock formations in Goblin National Monument. Instead of city light pollution, a bright, almost full Moon was high in the sky illuminating the formations. Even so, the camera captured some stars including the main stars of the constellation Orion above the center horizon. 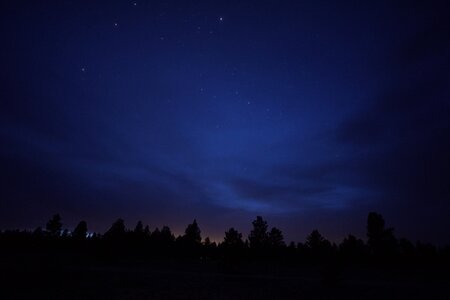 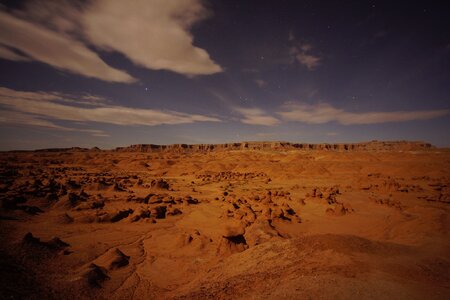 Reactions: FowlersFreeTime
You must log in or register to reply here.