Every once in awhile a harmless but freaky accident occurs on the drop zone. When winds are strong and gusty, they use “catchers” out on the DZ to assist landings during tandem jumps. The catcher’s job is to pull hard on certain shroud lines to collapse the canopy quickly before the wind drags the two jumpers tethered together, across the drop zone. It is quite possible for a shroud line to entangle around the jumper’s face, neck, arm, or leg after landing, and cause serious injuries from skin lacerations if the canopy inflates again at high gust speeds.

In this case, a catcher was racing toward a tandem landing, not noticing another tandem was quickly closing in on him from his right. He didn't see it coming. The unnoticed tandem jumpers slid immediately in front of catcher and forced the catcher to collide with tandem passenger as they slid to a stop. Nobody was injured.

Now, try to figure out which feet belong to which of three people involved.
. 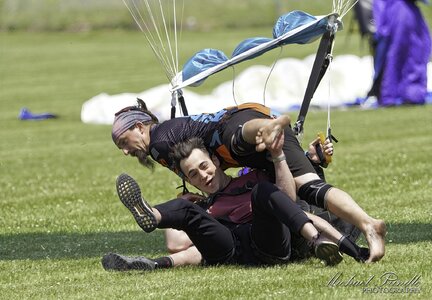 Reactions: FowlersFreeTime and Jeff A
You must log in or register to reply here.

Jumper in tandem choosing a spot to land.

A bit of fun with Black Head Gulls.