My second attempt at capturing some deep sky images with my a6000. Here's an image of a couple galaxies that are found about 5 degrees from the bowl of the Big Dipper. They are known by their Messier Catalog numbers of M81 and M82. M81 is a beautiful spiral galaxy, and M82 is an irregular. M82 is sometimes called the "Exploding Galaxy" because of a lot of activity in it's core, and a couple of dust lanes crossing the middle. Both images are composed of 30 - 30sec exposures, iso 1600 at the prime focus of my 94mm f/7 refractor, stacked and processed in Affinity Photo. Even though the sky was fairly bright, I was able to get some detail in the galaxies - the main dust lane in M82 and some star forming regions in the spiral arms of M81 and M101 (lumpiness). These galaxies is bright enough to be visible in binoculars if you know where to look. There's a third, fainter small galaxy in the upper left of M81 and 82. The other photo is one I need to reprocess to remove two satellite trails. I thought I'd post it as an example of why professional astronomers are complaining about the eventual launch of 30,000 Starlink satellites (These are probably not Starlink Satellites) This is M101 which is located just off the handle of the Big Dipper. It's a different class of spiral from M81 - Note looser more open spiral arm structure. It's also face-on where M81 is seen at an angle which makes it appear as an oval. 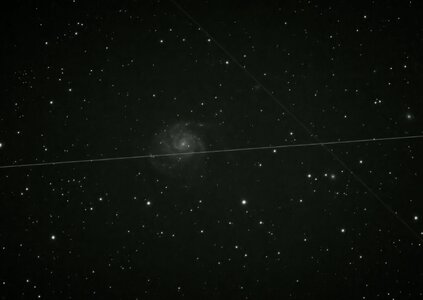 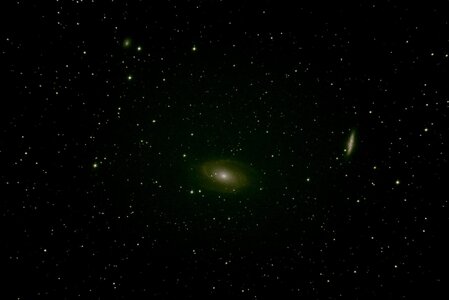 Here's the cleaned up version of M101 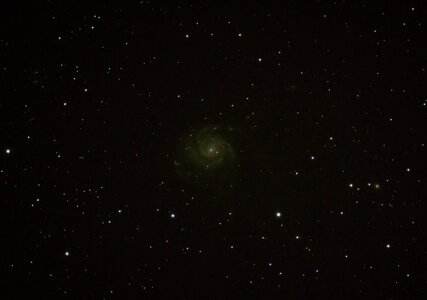 Another galaxy group known as the Leo Triplet for obvious reasons. Same set-up as above.

These are in an area of the sky where you can't swing a dead cat without hitting a galaxy! 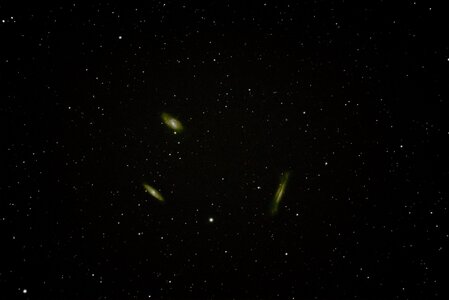