Welcome to my Sony a6100 (ILCE-6100) resource page. Here you will find the latest firmware version for the a6100, user guides, my accessories guide, FAQs and product images.

If you are looking for further help and advice on the a6100 or would simply like to share your photos and videos, then please head over to our friendly Sony a6100 Forum. If you prefer Facebook then I also run the Sony a6100 Shooters Group.

The Sony a6100 was announced on August 28 2019 and effectively replaced the very popular and successful Sony a6000.

Here’s one of Sony’s launch and promotion videos for the a6100:

The camera above the Sony a6100 is the a6400 and they are actually very similar.

If you shoot video then the a6100 is missing the picture profiles that can be found on the a6400.

The continuous shooting buffer is slightly smaller on the a6100, but it will still let you shoot 77 JPGs or 33 RAW files before it’s full. This compares to 116 JPGs or 46 RAW files on the a6400.

The a6100 is missing the magnesium alloy body and weather sealing that can be found on the a6400, although Sony does not guarantee that either camera is waterproof.

The a6100 is currently Sony’s entry level APS-C camera and will most definitely make for a great little all-rounder, the perfect travel camera or a blogging camera.

The a6100 is an entry-level mirrorless camera built around one of the best autofocus systems we’ve encountered (as of late 2019). With a couple of settings changes it can be one of the most powerful point-and-shoot cameras available, capable of taking good photos in a wide range of situations.

You can find the full Sony a6100 details and specifications over on Sony’s product page.

When was the Sony a6100 announced?

What memory cards does the Sony a6100 support?

What battery does the Sony a6100 use?

Sony claim that the a6100 is dust and moisture resistant, they don’t claim that it is fully waterproof and you should therefore use a rain cover if using the camera in wet weather or very dusty environments.

How many megapixels is the Sony a6100?

What is the a6100 mechanical shutter fps?

The maximum fps (frames per second) for the mechanical shutter of the a6100 is 11 fps.

What is the maximum shutter speed of the a6100?

Is the Sony a6100 a professional camera?

The Sony a6100 is more of an enthusiasts camera than a professional camera. 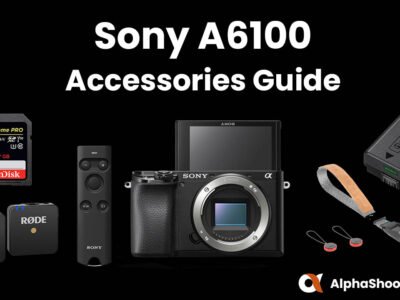