Welcome to my Sony a9 (ILCE-9) resource page. Here you will find the latest firmware version for the a9, user guides, FAQs, product images and my accessories guide.

If you are looking for further help and advice on the a9 or would simply like to share your photos, then please head over to our friendly Sony a9 Forum. If you prefer Facebook then I also run the Sony a9 / a9II Shooters Group. 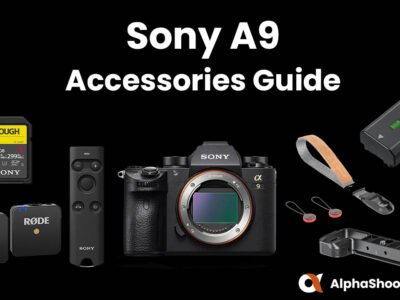 The Sony a9 was announced on April 19th, 2017 and was the first Alpha camera to feature a stacked sensor that allowed it to shoot 20 frames per second with zero blackouts using a completely silent electronic shutter.

Sony marketed the a9 for sports photographers but thanks to its mind blowing speed it didn’t take very long for it to become popular with wildlife photographers as well, especially those who enjoy shooting birds in flight.

The Sony a9 is more than just a refinement of the company’s a7-series of full-frame mirrorless cameras; it’s an evolution. With meaningful ergonomic and user interface improvements, the a9 is a polished and highly capable camera. It may not be a go-to camera for landscape and studio photographers, but its compact dimensions, silent operation, abundant speed and blackout-free shooting make it not only a step forward for mirrorless, but a compelling proposition for professionals who can’t afford to miss a moment.

I’ve owned the a9 since it was first released and can certainly attest for its speed in both initial subject acquisition, tracking and the number of shots in focus. It rarely misses and when it does it’s normally down to user error and not the camera.

I use my own a9 for shooting birds in flight the most, especially faster birds like puffins that are extremely difficult to capture in flight due to their speed and size, but the a9 has very little difficulty in nailing shot after shot.

Although the Sony a9II has since been released the a9 still remains a fantastic camera.

I decided not to upgrade to the a9II because I didn’t feel that it offered significant improvements to justify the expense. Upgrading would not have improved my photography in anyway, just dented my bank balance!

If you shoot sports or birds in flight, the Sony a9 will most definitely not disappoint you.

You can find the full Sony a9 details and specifications over on Sony’s product page.

What battery does the Sony a9 use?

The Sony a9 uses the Sony NP-FZ100 rechargeable battery pack.

When was the Sony a9 released?

The Sony a9 was announced on April 19th, 2017. First shipment was the following May.

What memory cards does the Sony a9 support?

UHS-I and UHS-II SD cards are supported in slot 1. Slot 2 only supports UHS-I SD cards, although you can still use UHS-II cards in slot 2 but you won’t get the speed benefits.

How many megapixels is the Sony a9?

What is the weight of the Sony a9?

Is the Sony a9 waterproof?

Sony claim that the a9 is dust and moisture resistant, they don’t claim that it is fully waterproof and you should therefore use a protective rain cover if using the camera in wet weather.

Is the Sony a9 a full-frame camera?

How many megapixels is the Sony a9?

Is the Sony a9 mirrorless?

Yes the Sony a9 is a mirrorless camera.

What is the Sony a9 mechanical shutter fps?

The maximum fps (frames per second) for the mechanical shutter of the a9 is 5 fps.

What is the Sony a9 electronic shutter fps?

The maximum fps (frames per second) for the electronic shutter of the a9 is 20 fps.

You can find a full list of lenses that support the maximum frame rate of 20 FPS here.